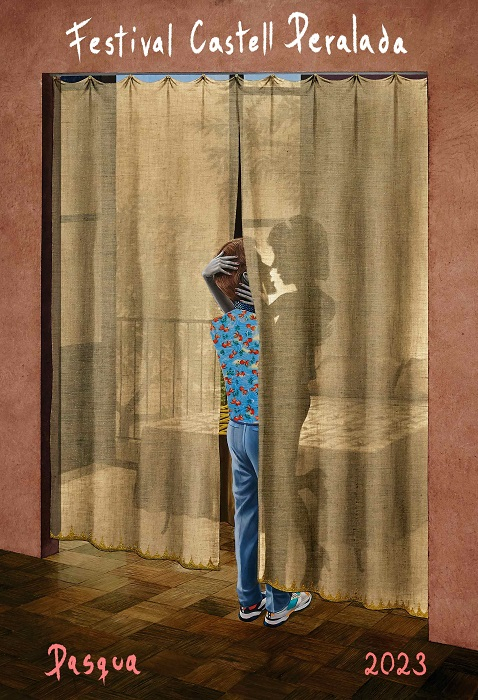 The Tecla Sala Centre for the Arts in l’Hospitalet del Llobregat this morning hosted the launch of the Easter edition of the Castell de Peralada Festival. An event that, as director Oriol Aguilà explained, the Festival has long wanted to hold but which was delayed by the pandemic. This year will see the first chapter in the history of an event that is here to stay. From 6 to 8 April, the Carmel Church at the Castell de Peralada will be the setting for a programme that comprises four concerts chosen to appeal both to the summer Festival’s faithful, loyal audience and to new audiences who want to enjoy excellent music on the Costa Brava in the week before Easter.

The Easter event will start on 6 April with a concert featuring social media star, countertenor Jakub Józef Orliński accompanied by orchestra Il Giardino d’Amore. Born in Warsaw in 1990, this young singer is not just a star of the stage but is also a member of breakdancing collective Skill Fanatikz Crew and a proficient skateboarder, he has modelled for leading brands and found an unmatchable way of advancing his career on social media where, for example, the YouTube video of his rendition of Vivaldi’s Vedrò amb mio diletto has amassed 10 million views. Considered by many as a phenomenon who transcends music, Orliński will perform at the Castell de Peralada Festival for the first time just days after appearing at the Palace of Versailles in a programme that interweaves arias by Handel and Vivaldi.

The following day, Good Friday, Carmel Church will host two shows. The first, featuring Baroque ensemble Arnadi’s Vespers under the musical direction of Dani Espasa, will be the first performance at the Festival of Scarlatti’s La Giuditta. Considered the founder of the Neapolitan school of opera, the Palermo-born composer composed this oratorio for three voices (also known as the Cambridge Giuditta in reference to the place where the handwritten score is kept) with libretto by Antonio Ottoboni, father of Cardinal Pietro Ottoboni and author of the first oratorio of the same name but for five voices and also based on the Bible's Book of Judith. For this performance, the Castell de Peralada brings together a stellar vocal offering formed by multi-prize-winning Barcelona soprano Serena Sáenz (winner of the 16th Montserrat Caballé International Singing Competition and the Castell de Peralada Festival Special Prize and undoubted protagonist of the most recent Operalia, where she won several of the prizes for which she was nominated, such as Best Zarzuela Singer, the Brigit Nilsson award, and the second prize for Best Female Voice at the competition) who will sing the part of Giuditta, the Jewish hero who liberated the besieged city of Bethulia after seducing and decapitating Assyrian general Holofernes. Countertenor Xavier Sabata, well-known to the Festival, together with Arnadi’s Vespers, will be Nutrice and charged with interpreting the beautiful Dormi o fulmine di guerra, one of the most moving cradle songs ever written. The final member of the cast is British tenor Thomas Walker, who last year took part in the new production of Purcell’s opera The Fairy Queen at the Castell de Peralada Festival.

That same Friday, at 11 pm, emerging vocal quartet Cantoría will sing at the Festival for the first time with the Good Friday Tenebrae service. A spectacle interpreted by eight voices where the ensemble will explore the spiritual depths of this Catholic service that combines liturgical polyphony and Gregorian chant. As the concert progresses, the candles will be extinguished as the works in the programme are sung to end in complete darkness as required by the most traditional form of the rite. Specialists in a capella works of the Iberian Renaissance, the young ensemble's trajectory is trending notably upward with their participation in international festivals such as Anvers, Bruges, Utrecht and REMA (Réseau Européen de Musique Ancienne), as well as Early Music Day 2021 where they were invited to take part thanks to the recent discovery of the unpublished manuscript of Totana, recovered by the group.

The final act of the Easter stage of the Castell de Peralada Festival 2023 will be one of the most anticipated debuts at the Festival, with young tenor Freddie De Tommaso. Winner of First Prize, the Placido Domingo Prize for Best Tenor and the Verdi Prize at the Viñas International Singing Contest in 2018, in 2021 he hit the headlines once more when he played the part of Cavaradossi in the Royal Opera's production of Tosca, becoming the youngest tenor ever to interpret the role on that iconic stage and the first British tenor to do so since 1963. Contracted to Decca Classics and the first tenor to sign with Jonas Kaufmann’s label, his debut album Passione reached the top of the classical charts and he recently won BBC Music Magazine’s Newcomer Award. In June 2022, his second album Il Tenore went straight to number one as soon as it was released, and the rendition of Nessun Dorma from the album already has more than a million downloads. Accompanied by Audrey Saint-Gil at the piano, the tenor has prepared a programme of arias and songs specially for the occasion.

The Easter Castell de Peralada Festival will also feature talks, roundtables and other activities. A programme of parallel activities during March in different spaces and institutions in Barcelona and Girona for the public to intensely enjoy this new cultural offering. Activities that have been unveiled only in part so far, such as a conversation titled The Universe of Scarlatti’s La Giuditta with Dani Espasa and Xavier Sabata on 15 March; two conferences around the Tenebrae Service led by Father Jordi Augustí Piqué, a monk at Montserrat, Dean of the Pontifical Institute for Liturgy in Rome with the in-person participation and performance of Cantoría on 22 and 23 March. The full programme will be completed in the coming days and will feature the involvement of the Friends of the Liceu and the Friends of Girona Opera.

The Encounter, a poster by Gino Rubert

From its earliest days, some thirty-seven years ago, the Castell de Peralada Festival has marked itself out as a cultural event whose reach goes beyond the staging of musical performances and shows, to become a space that generates new artistic production, where different disciplines find a place of encounter for dialogue and mutual enrichment. The posters for the Festival embody that spirit. Gino Rubert’s work, the image of this year’s Festival, shows two lovers who embrace among theatrical backdrops. An image of encounter, spectacle, music and sensuality. It is not by chance that this image is at the heart of the triptych Vanity Fair (An Altar without a Hero), that Gino showed at the National Museum of Art of Catalonia over the summer and then appeared over the winter at the Tecla Sala Centre for the Arts in L’Hospitalet and in 2023 will come to its permanent home at the Castell de Peralada.

Season tickets and tickets on sale

Starting tomorrow, 1 December at 10 am, early-bird season tickets for the Easter Festival for all three days (four events) go on sale with benefits including a discount on the individual ticket prices, access to the best seats before sale to the general public and priority access to extraordinary activities. Tickets will be on general sale from 12 noon on 5 December.

Season tickets and tickets can be purchased at www.festivalperalada.com